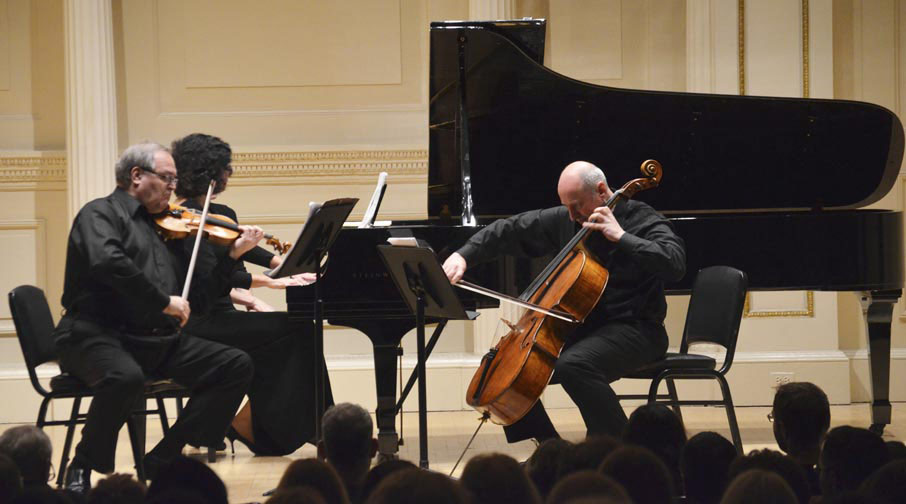 InterHarmony International Music Festival, which has been taking place in various European and American cities for the past 12 summers, will present a series of three concerts at Weill Recital Hall studded with an array of musical highlights from the Festival. The first performance takes place October 25, with additional concerts taking place January 25 and March 21, 2013.

2010 Pulitzer Prize-winner Jennifer Higdon, whose reputation has been rising with leaps and bounds since she began composing at 21, has always been fascinated by the connection between painting and music. "Can music reflect colors and can colors be reflected in music?" is a question she asks herself. For Higdon, melodies, harmonies and the instruments themselves are the composer's paint and canvas. Piano Trio, originally commissioned by the Vail Valley Music Festival, embodies this fascination.

Swiss-born and now living in Italy, Thomas Fortmann began his musical career as a song writer, writing his first "hit" at 16 followed by over 100 titles released in more than 27 countries and sung by rock stars throughout Europe. Abandoning his pop music career at 26 to commit himself to "serious" studies in composition and instrumentation, Fortmann went on to receive fellowships and commissions from major European houses as well as from the University of Houston in the United States. His Prolitheus Suite for Violin, Piano and Cello, written as an unlikely suite of contrasting musical forms, incorporates twelve tone composition (1st movement); Scriabin's mystic chord that the composer used in his Prometheus (2nd movement); blues to commemorate the section having been written as a tribute to the American South (3rd movement); a play with 12 tones (4th movement); inspiration from the vaudeville song "From Heaven Comes Hell" (5th movement) and finally, the finale or 6th movement. Reflecting his attitude toward music and most likely his own rigorously constructed compositions, Fortmann says: "Music that is purely mathematical is non-sensual. But music without mathematics is nonsense."

Written when Rachmaninoff was only 19 years old and still a student, Trio élégiaque, unlike most piano trios, has only one movement, which was created in the classical form of a sonata. Dvořák's much-celebrated Piano Trio No. 4, whose six sections range from gloomy to light-hearted, has been considered a benchmark in the composer's career.

Violinist ANDRZEJ GRABIEC, prizewinner at the Fifth International Henryk Wieniawski Violin Competition in Poland (1967) and the International Jacques Thibaud Violin Competition in Paris, France (1969), made his debut with Opole Philharmonic Orchestra in Poland at age 14. He studied at the Szymanowski Academy of Music in Katowice, Poland, where he was later appointed Professor of Violin. He went on to become a soloist and concertmaster of the Great Symphony Orchestra of the Polish National Radio and Television and the leader of Capella per Musica da Camera. Grabiec became concertmaster at the Rochester Philhamonic, the Wichita Symphony Orchestra in Kansas, as well as Music Director of the Mozart Festival Chamber Orchestra. Grabiec became Professor of Violin at the Moores School of Music at the University of Houston in 1995. He performed with the Houston Symphony in 1999, and is a founder and Artistic Co-Director of the Virtuosi of Houston. Invited by Australia's government, Grabiec served as Artistic Director of an Olympic Arts Tour throughout Australia, New Zealand, and the South Pacific Islands, where he also performed as a violin soloist and conductor in 1999. In 2002 Grabiec performed the world premiere of Concerto for Violin and Orchestra, "Seren", by American composer Peter Lieuwen, and was its dedicee. Grabiec made his Chinese debut in 2008 in Guangzhou, China with master classes and a performance of Saint-Saens Violin Concerto with the Xinghai Conservatory Symphony Orchestra. He has performed under conductors such as Pierre Boulez, Erich Leinsdorf, Krzysztof Penderecki, Witold Lutoslawski, Kazimierz Kord, Mark Elder, and Erich Bergel and continues to teach and perform at a litany of music festivals around the world.