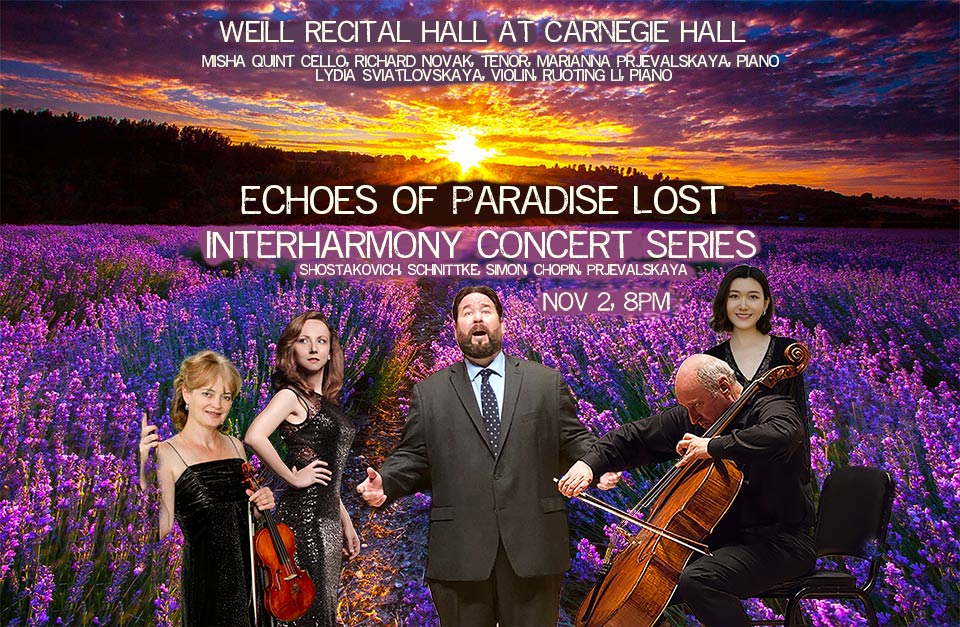 Times change. The clock’s hands are poised to make circles, but depth of feeling has its hands still with a concentration of intensity that cannot be affected by the heartbeat of the universe. Featuring works by Shostakovich, Schnittke, Chopin, Prjevalskaya, and a New York premiere of newly discovered songs by James Simon, “Echoes of Paradise Lost” evokes the rare condition when different epochs, genres and crucial dramatic moments of humanity symbiotically grow together from the same tree of sounds, passages, and chords.

The InterHarmony Concert Series, started by Music Director Misha Quint, showcases performers from the InterHarmony festivals that take place each summer in Italy and Germany. Tickets are $40 and can be purchased online www.carnegiehall.org or by calling CarnegieCharge at 212.247.7800.

Two contrasting works of Alfred Schnittke underscore the theme of the evening: Suite in the Old Style for Violin and Piano, where reflections of the Baroque are filled with a palette of old-school harmonies at times capricious, and Cello Sonata No.1, intoned with tragic, climactic passages, almost screams of the soul, as if glancing through a prism of the iconic 20th Century composer’s creativity. Sonata mirrors Schnittke’s own life, greatly affected by his experience of Soviet persecution. Cellist Misha Quint and pianist Marianna Prjevalskaya perform Cello Sonata, while Violinist Lydia Sviatlovskaya and pianist Ruoting Li perform Suite.

Chopin’s Scherzo No.2, performed by Marianna Prjevalskaya, naturally brings beauty and finesse to the program. In Prjevalskaya's La Valse a La Ravel, one feels a transformation that echoes Ravel’s impressionism.

After composer James Simon’s death in a Nazi concentration camp, his works survived and were recently found. Richard Novak (tenor) and Ruoting Li (piano) will give the New York premiere of Simon’s The Bell Tolls in the Ground and 5 Lieder. 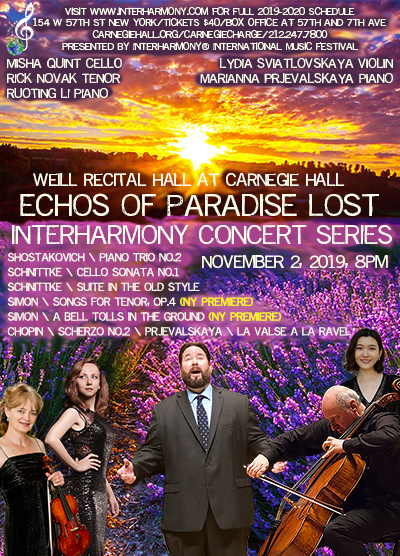 MARIANNA PRJEVALSKAYA has appeared with major orchestras such as the Cincinnati Symphony Orchestra, Louisiana Philharmonic Orchestra, National Lithuanian Symphony Orchestra, and collaborated with renowned conductors such as Ion Marin, Roberto Trevino, Carlos Prieto, David Danzmayr. As a recitalist, Marianna performed in venues such as the Mozarteum in Salzburg, Accademia Santa Cecilia in Rome, Teatro Goldoni of Florence, Minato Mirai Hall in Yokohama, Weill Hall in New York. Her debut at Weill Hall was praised by Frank Daykin as “one of the major piano recitals of the season” and “a stunning display of mature pianism”. (New York Concert Review, New York). Spanish critic Santi Riu complimented Marianna as a “virtuoso, impetuous, passionate and mature pianist of great musicality” (Diario Segre, Spain.) Marianna won top prizes at the 2014 New Orleans International Piano Competition, the 2013 World Piano Competition in Cincinnati, the 2013 European Piano Competition in Normandy, the 2012 Panama, 2011 Jaén, 2010 Sendai, 2008 Jose Iturbi and 2007 Paderewski International Piano Competitions. Her first CD was released by Naxos in 2012; most recent album dedicated to Rachmaninoff was released in June 2016 by Fanfare Cincinnati and was praised by critics in the US and in Spain. Jaime Pantín writes in magazine Codalario that “her polyphonic transparency is astonishing, and her execution is of impeccable precision, clarity, virtuosity and beauty of sound.”

LYDIA SVIATLOVSKAYA, a native of Leningrad (now St.Petersburg), graduated from the Special Music School for Gifted Children in Leningrad and then obtained her Master’s degree from the Moscow Conservatory. Among her teachers was world-renowned violinist Leonid Kogan. Her solo appearances with orchestras include The Moscow Orchestra of Chamber Music, USSR State Chamber Orchestra, Moscow Radio Symphony, Winnipeg Royal Ballet, Central City Opera Festival Orchestra, and in Colorado the Evergreen Chamber Orchestra, Mercury Ensemble Chamber Orchestra, Vail International Dance Festival, and Colorado Springs Philharmonic Orchestra. Currently Lydia is a Concertmaster of Colorado Ballet and she has a private Music Studio in Denver. Lydia regularly performs with pianist Olga Dashevskaya as Duo Classica. Colorado Public Radio frequently promotes the ensemble on air through a collection of recordings made at their studio. Lydia has given numerous Solo and Chamber Music Recitals in Europe and United States. In 2019 she joined the Interharmony International Music Festival in Italy as a teacher and performer.

Chinese pianist RUOTING LI is an eclectic artist who is eager to explore a wide range of musical styles and repertoire, both as a solo pianist and chamber musician. Praised as “a pianist and musician who is most satisfying”, she has poetic qualities and an appealing, intensely musical performing style. Born in Hunan, she started to play piano at the age of 6 and was admitted to the Central Conservatory of Music Middle School in Beijing when she was 11. In 2014, Ms. Li came to the U.S., and was awarded a full scholarship to attend the Manhattan School of Music, where she earned her B.M. degree in May 2018. Currently pursuing a Master Degree in Piano Performance at MSM as a full scholarship recipient, Ms. Li has been involved in numerous outside activities, such as outreach concerts, studio producing, and new music recording. As a winner of the Lillian Fuchs Chamber Music Competition, Ms. Li was a collaborative pianist at the Eastern Music Festival in the summer of 2019, where she also served as orchestral pianist.