When the words stop, the soul sings
Misha Quint, Tali Morgulis Perform “A Cellist’s Prayer” at Carnegie Hall on Apr 29

When the words stop, the soul sings - Misha Quint, Tali Morgulis Perform “A Cellist’s Prayer” at Carnegie Hall on Apr 29, 2022 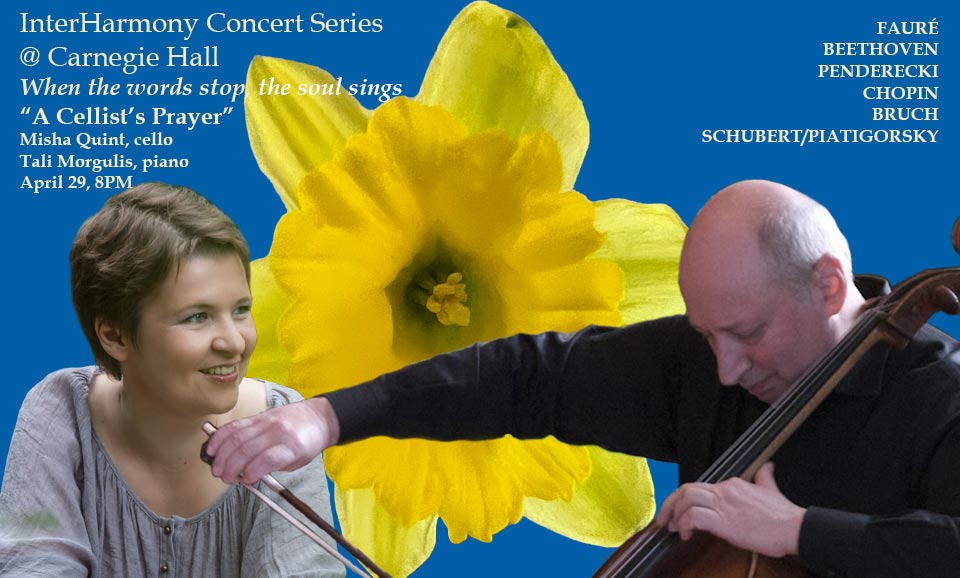 InterHarmony® International Music Festival is happy to present the triumphant return of the InterHarmony Concert Series with a performance by Russian-born cellist Misha Quint and Ukrainian-born pianist Tali Morgulis of “When the Words Stop, the Soul Sings. A Cellist’s Prayer”. This inaugural event, the first since 2020, follows on the heels of a successful summer of festivals in Italy and online. It is a musical expression of the many emotions people around the world are currently feeling, featuring pieces which allow the emotive nature of the cello to shine. The performance will take place on April 29, 2022 at 8 PM at Weill Recital Hall at Carnegie Hall. Tickets can be purchased online at www.carnegiehall.org, or by calling CarnegieCharge 212-247-7800. More information can be found at www.interharmony.com.

The program begins with Faure’s Elegie, the first movement of a never-realized sonata, and then segues into Beethoven’s Cello Sonata No. 2 in g minor, Op. 5, an expressive and artistically intricate piece which perfectly marries the piano and cello parts. Then, Quint pays homage to Krzysztof Penderecki, performing Per Slava using Penderecki’s sonoristic style. In these times, this piece takes on extra significance as it is dedicated to renowned Russian cellist and human rights advocate Mstislav Rostropovich.

Emotions continue to crescendo with a performance of Max Bruch’s Kol Nidrei, Op.47. The tune is an emotionally charged prayer which is sung throughout the world to open services on the holiest day of the Jewish year. It said with great devotion, with the hope that the next year will be one filled with happiness and redemption. Bruch’s adaptation retains both the solemnity and underlying optimism of the original. Misha Quint and Tali Margulis expertly voice this great breadth of emotion through their respective instruments, as though the cello and piano were crying out.

The performance continues with Chopin’s Cello Sonata in g minor, Op. 65. This Sonata, his last major work, has roots in the romantic style, but also deviates and begins post-romantic explorationsevolves into tempestuous waves of virtuosity. Although the first movement was not played at the premiere, it is now considered ahead of its time.

The program concludes with Schubert’s Introduction, Theme, and Variations, arranged by Gregor Piatigorsky, a Ukrainian-born cello virtuoso who escaped from Russia to Poland before coming to the U.S. This piece showcases Misha Quint’s artistry and bow technique while continuing to propel the audience’s emotional journey.

Cellist Misha Quint and Pianist Tali Margulis, each experts at their craft, will bring their knowledge and artistry to the Carnegie Hall stage in a breathtaking, not-to-miss event for when the words stop, the soul sings.

Israeli-American pianist TALI MORGULIS is a passionate performer and a dedicated pedagogue. Prize winner of several international competitions, Dr. Morgulis continues to present critically acclaimed solo, chamber music, and orchestral performances worldwide. An expert collaborator, Tali has shared the stage with such renowned musicians as soprano Albina Shagimuratova, cellist Misha Quint, violinist Uri Pianka, mezzo-soprano Sonja Bruzauskas and many others. Tali’s recordings can be found on Delos, Albany, and Navona labels. Dr. Morgulis’ students come from many different countries and backgrounds. They describe her as a great motivator and an inspiring mentor. She takes pride in supporting not only their performance and teaching but also in becoming important members of their respective communities. Tali began her college teaching career at Fort Hays State University, KS in 2005. She is currently an Associate Professor of Piano at the Moores School of Music, University of Houston, TX. Tali started her music education in her native Ukraine at age 4. She continued studying piano after moving to Israel at age 15. Dr. Morgulis holds degrees in piano performance from Tel Aviv Academy of Music (BM and MM), the New England Conservatory in Boston, MA (DMA). She holds diplomas from the Manhattan School of Music and the Conservatoire Royal de Bruxelles. She was fortunate to study with such wonderful musicians as Esther Balasha, Mikhail Boguslawski, Wha Kyung Byun, Lev Natochenny, Alexander Gorin (organ) and Patricia Zander (chamber music).

InterHarmony International Music Festival has been taking place in European and American cities for the past 15 summers, transports the excitement of its European music festivals to New York City for a series of 3 concerts for the ninth season. Come see our concerts in Italy and Germany as well this summer at the InterHarmony International Music Festival!