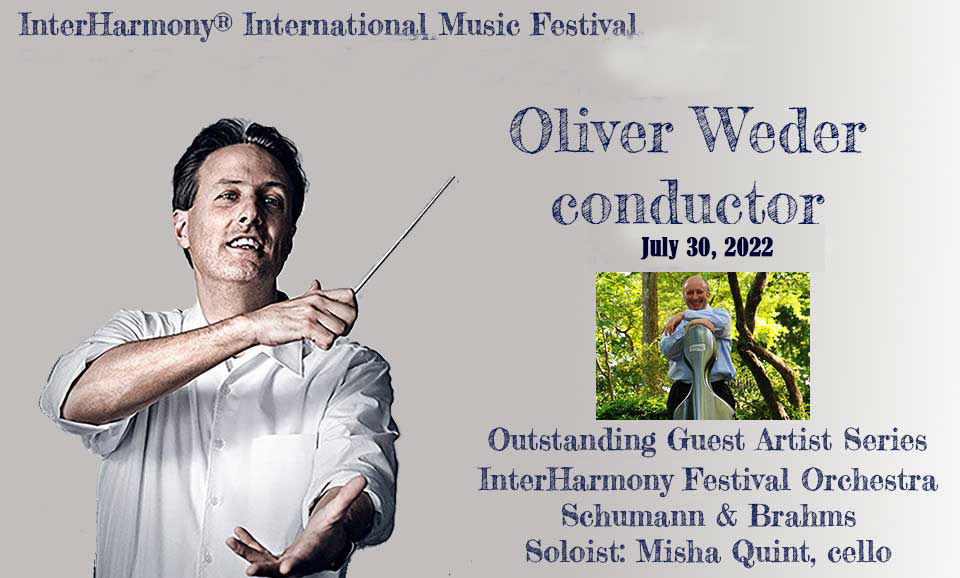 German conductor Oliver Weder has been Music Director and Chief Conductor at the Thueringen Symphony Orchestra and the opera in Rudolstadt, Germany. During his tenure at the helm of this important ensemble, this world class ensemble performs more than 100 concerts and music-theatre performances per season.

Maestro Weder studied conduting with Jiri Starek, Bernhard Kontarsky and Rolf Reinhard at the Music Academy in Frankfurt and completed his conducting education as the first West-German scholarship-holder with Ilya Musin at the St. Petersburg State Conservatory. His first long-term engagement led him to the Hoary State Opera and Ballet Theatre Perm/Russia where he gave more than 30 different performances per month at this venerable institution.

Just a year later the "Flying Dutchman" appeared for the first time on stage under his baton. The performance caused a sensation that was noted even in Germany. The Bavarian Radio and Newspapers like “Sueddeutsche Zeitung” and “Frankfurter Rundschau” were on their way to Perm to document his work.

In 1994, Weder was appointed the assistant conductor to Maestro Valery Gergijev at the Mariinsky Theatre. during his time there he led this world-class orchestra in performances of Salome, Parsifal and La Traviata with own monthly performances. During this period, Maestro Weder was appointed Chief Conductor of the Rimsky-Korsakov Opera and Ballet Theater of the Conservatory. Operatic triumphs included productions in South Korea,the Savonlinna Festival in Finland, concerts in Hamburg and Frankfurt, including further guest-conducting appearances at the Mariinsky Theatre.

A production of Mozarts “Cosi fan tutte” yielded him a nomination for the Theatre-Award of the City of St. Petersburg for the best conductor of the year and he played a part in the Anna Karenina film adaptation starring Sophie Marceau. Weder was developed close working relationships with some of the world’s preeminent musicians of our generation including Mariss Jansons and Hartmut Haenchen at the Netherlands Opera in Amsterdam.

Maestro Weder continues his close working relationship with the orchestras of St. Petersburg including opera productions during the “Mozart-Year” 2006, an engagement as honorary Conductor with Shostakovich's "Leningrad" Symphony on the 65th Anniversary of VE day, and a current open-air production of the opera "Demon" by Anton Rubinstein.

Extensive TV-productions on Schiller’s birthday in 2009, most recently the 20-year anniversary of the German reunification and CD and radio recordings presenting compositions of the Rudolstadt Court-Chappell are further examples of Weder’s devotion to his art and the community for which it serves. As a leader in his community, Maestro Oliver Weder is Chairman of the Board of Trustees in a regional Community Foundation and as a deputy in the county council for social and cultural projects in the region.