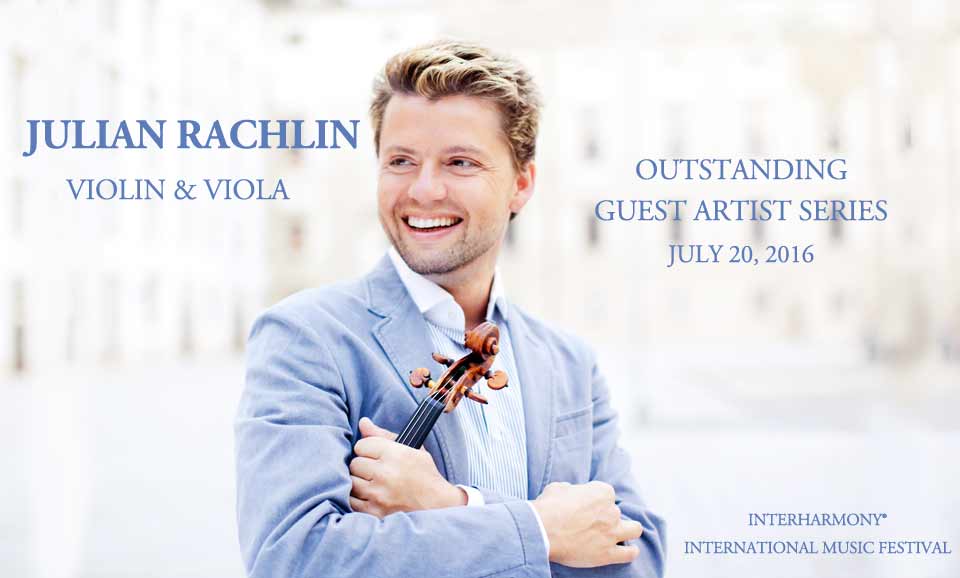 Julian Rachlin is one of the most exciting and respected violinists of our time. Over the last 27 years, he has been captivating audiences around the world with his distinctively rich sound, superb musicianship and outstanding interpretations. He has established close relationships with many of the most prestigious conductors and orchestras. Always willing to expand his musical horizons, Julian is also praised as a viola player and conductor. For 12 years, Julian has been leading the internationally renowned "Julian Rachlin & Friends" festival in Dubrovnik, Croatia, a platform for creative and vibrant projects with leading musicians and actors. Besides delighting his audiences with his musical performances, Julian is also receiving recognition as a young philanthropist for his charity work as a UNICEF Goodwill Ambassador and his educational outreach.

In the 2015/16 season, Mr. Rachlin will tour Europe and North America with the Orchestre National de France and Daniele Gatti as the Orchestra's 2015/16 Artist in Residence. He will open the season of the La Scala Philharmonic Orchestra with Riccardo Chailly, and perform at the Lucerne Festival with the Bayerischer Rundfunk Symphony Orchestra and Mariss Jansons. Other highlights as soloist include a Germany tour with the Tchaikovsky Symphony Orchestra and Vladimir Fedoseyev, and his debut at the Edinburgh Festival with the Leipzig Gewandhaus Orchestra and Herbert Blomstedt.

Recent notable engagements include Julian Rachlin's residency at the Vienna Musikverein, where he opened the season with the Munich Philharmonic and Semyon Bychkov, conducted the English Chamber Orchestra along its European tour, and appeared in trio with Mischa Maisky and Itamar Golan. He toured Europe with the Leipzig Gewandhaus Orchestra and Riccardo Chailly, and performed with the China Philharmonic, Shanghai and Guangzhou Symphony Orchestras under the baton of Long Yu. He also performed with the Philharmonia Orchestra and Vladimir Aschkenazy, the London Philharmonic and Andrey Boreyko, the Bavarian State Orchestra with Zubin Mehta and Kirill Petrenko, the Boston Symphony Orchestra with Alan Gilbert, and the St. Petersburg Philharmonic with Yuri Temirkanov.

In recital, Mr. Rachlin will be heard among others in Amsterdam, Bologna, New York and Montreal, with pianists Itamar Golan and Magda Amara. He will also perform in Paris and Essen with Evgeny Kissin and Mischa Maisky.

In 2012, Julian performed the world premiere of Krzysztof Penderecki's Concerto Doppio at the Vienna Musikverein with Janine Jansen and the Bavarian Radio Symphony Orchestra conducted by Mariss Jansons. This concerto was commissioned by the Musikverein and is dedicated to Julian.

Born in Lithuania in 1974, Julian immigrated to Vienna in 1978. He studied violin with the eminent pedagogue Boris Kuschnir at the Vienna Conservatory and took private lessons with Pinchas Zukerman. He gained international acclaim overnight in 1988 by winning the "Young Musician of the Year" Award at the Eurovision Competition in Amsterdam. He then became the youngest soloist ever to play with the Vienna Philharmonic, making his debut under Riccardo Muti. At the recommendation of Maestro Mariss Jansons, Julian Rachlin has been studying conducting with Sophie Rachlin. Since September 1999, he has been on the violin faculty at the Konservatorium Wien University. Julian Rachlin's recordings for Sony Classical, Warner Classics and Deutsche Grammophon have all been met with great acclaim.

Julian Rachlin plays the 1704 "ex Liebig" Stradivari, on loan to him courtesy of the Dkfm. Angelika Prokopp Privatstiftung, and a 1791 Lorenzo Storioni viola. His strings are kindly sponsored by Thomastik-Infeld.