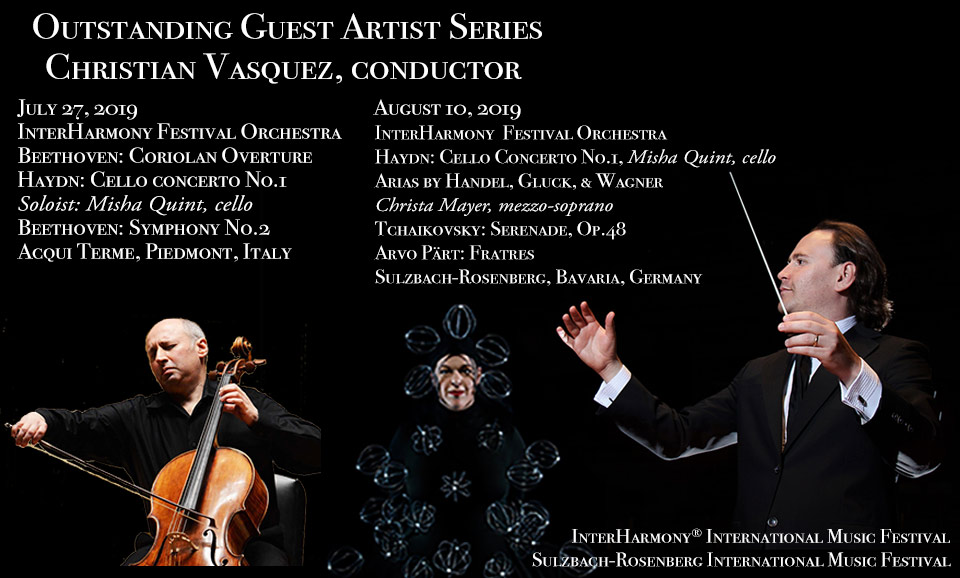 Renowned for his charismatic stage presence, powerful interpretations and compelling musical integrity, conductor Christian Vásquez continues to attract international attention as one of the most outstanding Venezuelan conductors working today.

Christian Vásquez became Chief Conductor of the Stavanger Symphony Orchestra at the beginning of the 2013/14 season, inaugurating the start of an initial four-year term with Mahler Symphony No. 2 in the orchestra’s new hall in August 2013. The 2015/16 season saw him become the Principal Guest Conductor of the Het Gelders Orkest, starting his tenure with a tour of the Netherlands featuring an all-Latin programme. He was also Music Director of the Teresa Carreño Youth Orchestra of Venezuela in 2010-2017, notably leading them on many tours in Europe which saw them perform in London, Berlin, Lisbon, Toulouse, Munich, Stockholm and Istanbul.

In addition to his regular commitments in Stavanger and Arnhem, 2018/19 sees Christian return to the Tokyo Philharmonic Orchestra for Beethoven 9 concerts as part of the orchestra’s long-standing December tradition. He will also make his debut with the Seoul Philharmonic Orchestra and soloist Stefan Dohr. Further orchestral highlights include collaborations with the Naples Orchestra, Castilla and León Symphony Orchestra and Orquesta Sinfonica de Galicia.

Born in Caracas, Christian joined the San Sebastian de los Reyes Symphony Orchestra as a violinist at the age of nine. He began conducting studies under the tutelage of José Antonio Abreu in 2006 and was appointed Music Director of the Aragua Juvenile Symphony Orchestra Jose Felix Ribas soon after.